A gleaming rotisserie is used to slow-roast chicken à la broche, loin of lamb, and even rum scented pineapple. The restaurant is open for dinner seven nights, lunch Monday through Saturday, brunch on Sundays, and breakfast daily. A number of seats are also reserved for walk-ins every night.

The dining room is envisioned by London-based designer Martin Brudnizki. The vintage-inspired ambiance is highlighted by a comfortable lounge and wraparound banquettes, a dining bar counter, and a semi-private room that accommodates up to eight guests.

Experience d|bar, our spirited lounge on the ground floor serving an array of classic and creative cocktails, and a diverse menu of complete meals and small plates.

Named for the café Daniel Boulud’s family operated outside Lyon at the turn of the century, the first modern-day Café Boulud opened in the original Upper East Side location of his eponymous restaurant DANIEL in 1998, in New York City.

In 2015, Daniel Boulud reopened Café Boulud in Toronto with a reimagined, mid-century design and a new menu. The dining room was envisioned by London-based designer Martin Brudnizki to have a vintage-inspired ambiance highlighted by a comfortable lounge and wraparound banquettes, a dining bar counter, and a semi-private room that accommodates up to ten guests.

Named for the café Daniel Boulud’s family operated outside Lyon at the turn of the century, the first modern-day Café Boulud opened in the original Upper East Side location of his eponymous restaurant DANIEL in 1998, in New York City.

In 2015, Daniel Boulud reopened Café Boulud in Toronto with a reimagined, mid-century design and a new menu. The dining room was envisioned by London-based designer Martin Brudnizki to have a vintage-inspired ambiance highlighted by a comfortable lounge and wraparound banquettes, a dining bar counter, and a semi-private room that accommodates up to ten guests. 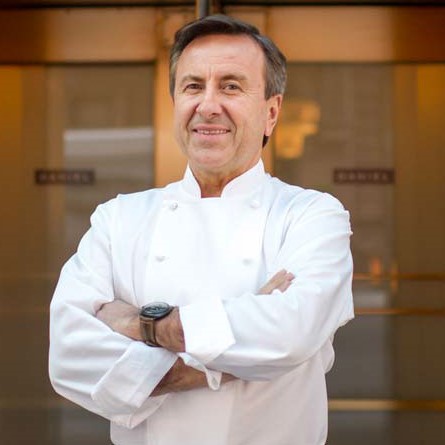 Daniel Boulud is Chef-Owner of several award-winning restaurants and the Feast & Fêtes catering company. While he hails from Lyon, France, it is in New York that he has truly mastered the dining scene and is today considered one of America’s leading culinary authorities. Raised on his family’s farm in the village of Saint-Pierre-de-Chandieu, the chef remains inspired by the rhythm of the seasons and menus driven by fine ingredients. Since arriving in the US in 1982, Boulud has become renowned for the contemporary appeal he adds to soulful cooking rooted in French tradition.

Daniel Boulud’s New York City restaurants include his flagship DANIEL (1993), a Michelin starred Relais & Châteaux member; the elegant one Michelin star Café Boulud (1998) with its adjacent cocktail bar, Bar Pleiades; his contemporary Parisian bistro, db bistro moderne (2001); two Upper West Side restaurant including the charcuterie-centric Bar Boulud (2008) and the Mediterranean themed Boulud Sud (2011). DBGB Kitchen and Bar (2009), situated downtown on the corner of Bowery and Houston, is chef’s relaxed restaurant where the French brasserie meets the American Tavern. Épicerie Boulud (2011), with locations across from Lincoln Center and within The Plaza Food Halls, is an eat-in and take-out market and café, with exquisite homemade and gourmet items from around the world.

Beyond Manhattan the chef has created Café Boulud in Palm Beach (2003) and db bistro moderne in downtown Miami, Florida (2010). Boulud has extended his culinary reach internationally with db bistro moderne at Singapore’s Marina Bay Sands (2010), Bar Boulud London (2010) at the Mandarin Oriental Hyde Park, Café Boulud at the Four Seasons Hotel Toronto (2012), and Maison Boulud at the Ritz-Carlton Montréal (2012). In spring 2014 the Chef returned to Las Vegas and opened db Brasserie in partnership with The Venetian® Las Vegas. Additionally, in September 2014 he opened a second DBGB at downtown Washington D.C.’s CityCenterDC, and Bar Boulud at Boston’s Mandarin Oriental.

Boulud’s culinary accolades include James Beard Foundation awards for “Outstanding Restaurant,” “Outstanding Restaurateur,” “Best Chef, New York City” and “Outstanding Chef of the Year.” He has been named “Chef of the Year” by the Culinary Institute of America and Chevalier de la Légion d’Honneur by the French government. Restaurant DANIEL has been cited as “one of the ten best restaurants in the world” by the International Herald Tribune, has earned multiple Michelin stars and Wine Spectator’s “Grand Award”. In 2015 the World’s 50 Best Restaurants awarded Boulud its Lifetime Achievement Award for his success as a restaurateur, businessman, and ‘chef who is revered as one of the world’s finest.’ Boulud’s culinary style is reflected in nine cookbooks, including the definitive DANIEL: My French Cuisine (Grand Central Publishing, 2013) and his most recent My Best: Daniel Boulud (Ducasse Books, 2014). 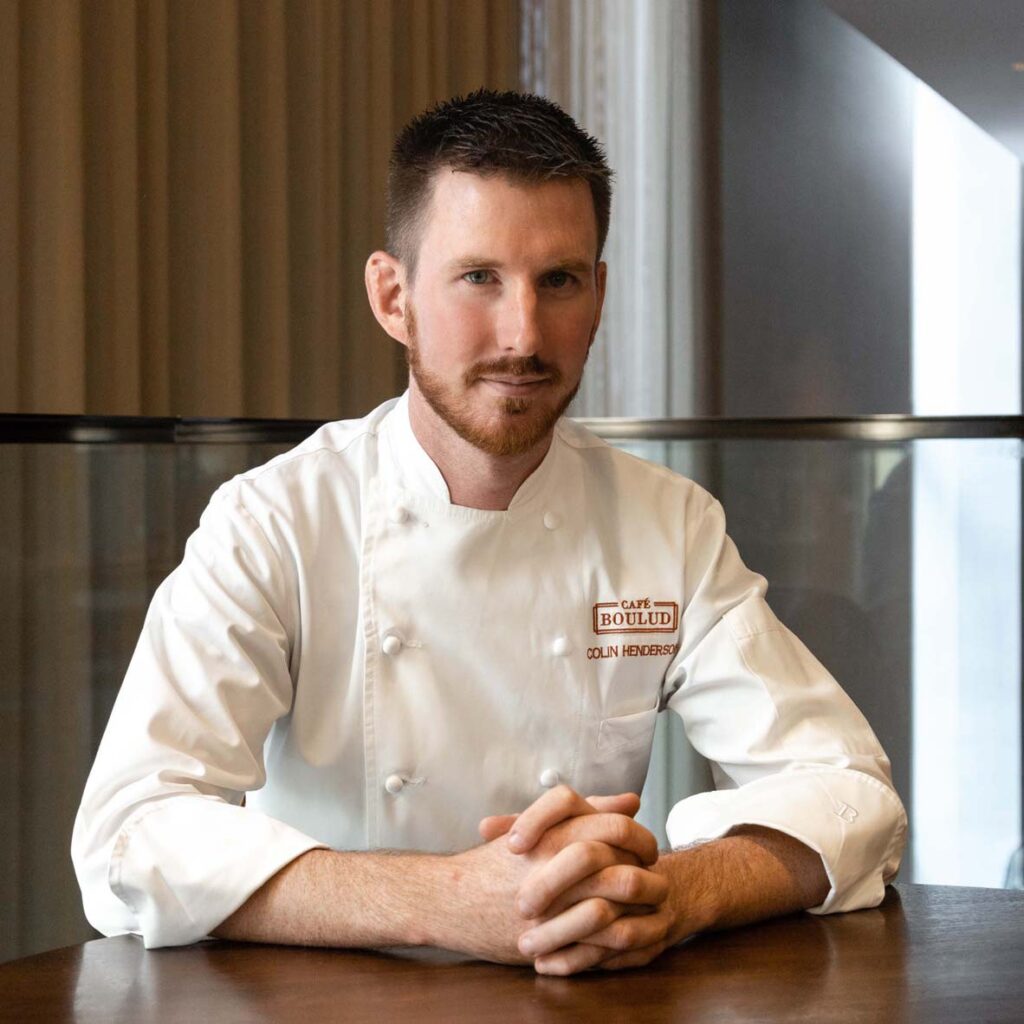 An aspiring chef at a young age, Colin Henderson grew up north of Toronto in Barrie, Ontario where he was eager to learn the skills and techniques needed to excel in the culinary field. Colin started his career at 15 years old as a Commis II at a local restaurant where he immediately fell in love with the intensity, passion and flair of cooking. Through this experience, Colin learned about the finer and more artistic technicalities of the kitchen which appealed to both his creativity and his interest in the culinary arts.

In 2009, Colin attended Algonquin College for Culinary Management and Chef’s Training leading him to work as a sous chef at Beckta, a fine-dining restaurant group in Ottawa. This was Colin’s first introduction to farm-to-table cooking where he learned how to develop seasonal and local menus while managing a strong team. A few years later, Colin was ready to take the next step in his career when Chef Daniel Boulud, a mentor and inspiration throughout Colin’s career, presented him with the opportunity he was waiting for.

In 2018, Colin officially joined the culinary team in Toronto at Café Boulud working directly under Chef de Cuisine Nicholas Trosien. Cooking at a restaurant as distinguished and well known as Café Boulud allowed Colin to challenge himself and push boundaries when preparing, creating and presenting French cuisine. Café Boulud has since grown to become more than just another restaurant to Colin – it serves as the foundation that shaped him into the dedicated chef and manager he remains today.

In August 2021, Colin was promoted to Chef de Cuisine at Café Boulud. In his new role, Colin looks forward to introducing more farm-to-table concepts and showcasing fresh, local and seasonal ingredients while staying true to the restaurant’s French roots. Colin is thrilled to lead and inspire a team of young chefs and continue pushing them to deliver the highest calibre of dining, ensuring the best possible experience for every Café Boulud guest.