The French-American menu, created by Chef Daniel Boulud and Executive Chef Dieter Samijn, parallels that of Café Boulud New York with a touch of South Florida flavor. With a spotlight on the incredible seafood and produce of the region, the menu showcases classic French dishes synonymous with Boulud himself, modernized to suit the cosmopolitan palate of Palm beach: Local Spiced Mahi with Key West Shrimp and Curry Leaf, Pan Seared Scallops with Brussels sprouts and miso jus and the beloved Dover Sole Meuniere, filleted tableside.

The Courtyard Terrace at the Brazilian Court and the restaurant’s elegant Dining Rooms, with a shimmery ceiling made from sea shells and Pecky Cypress, have long been the place for Palm Beach locals to be entertained in style, to throw a lavish event or host a memorable wedding day.

Our wine cellar is filled with vintages from every continent and led by our on-staff sommelier. The impressive array of selections is arranged by grape variety and our team of experts is always available to suggest pairings for your dining experience.

During the high season, jackets are preferred. Shorts and beachwear are not permitted. 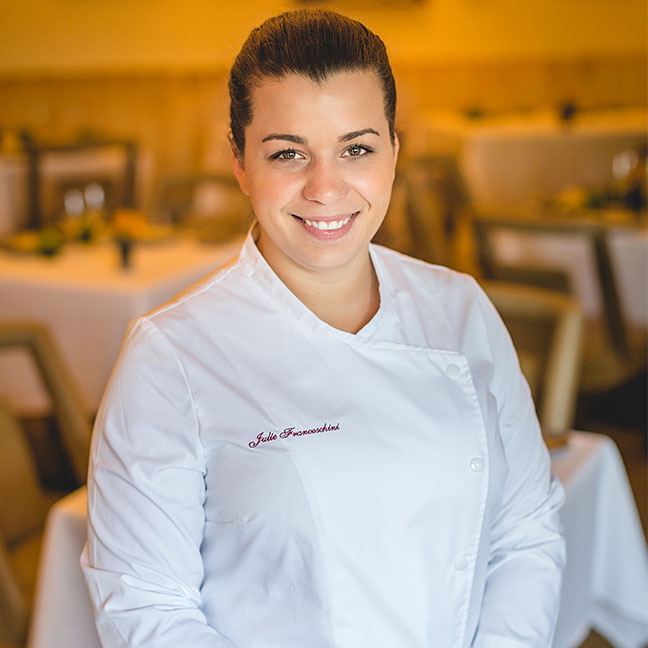 Julie grew up in L’Ile-Rousse on the island of Corsica surrounded by the smells of her grandfather’s coffee roaster, a business that had been in her family for generations. Coming from a Corsican family, where the women are traditionally excellent cooks, Julie has memories of her great grandmother making her cakes when she was very young. The smell of coffee and biscuits from her childhood inspired her career in pastries and cuisine.

It was in her hometown at Restaurant Pascal Paoli under Chef Ange Cananzi that Julie truly found her passion and love for the world of cuisine. Her bachelor’s degree in Pastry Arts from the School of Hotel and Tourism Paul Augier and years of professional experience, including time spent at the three Michelin star Parisian restaurant L’Ambroisie with Chef Bernard Pacaud, helped develop the precision, rigor and perfection she brings to her work. From 2013 to 2015, Julie worked as a pastry chef at L’Oggi in Corsica alongside the Chef de Cuisine Julien Diaz, before making the transition from France to the United States. 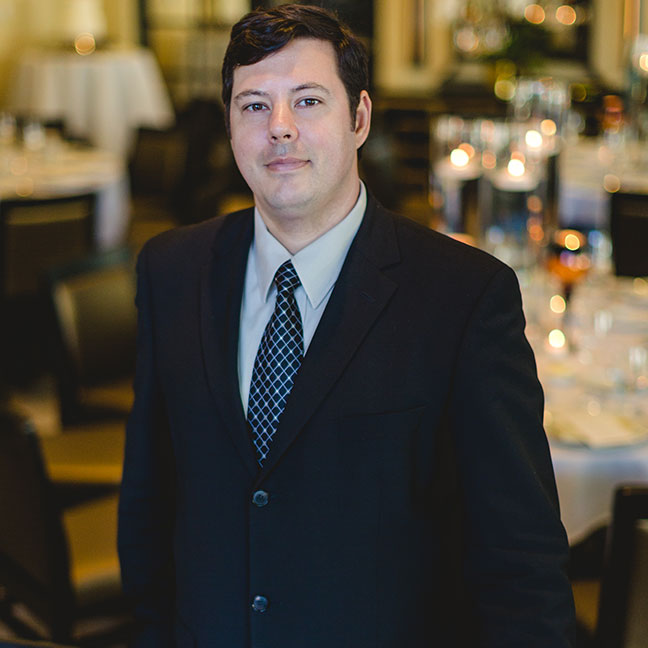 Imre’s career in the restaurant industry began at Antonia’s Italian Restaurant in Key West where an Italian wine dinner acquainted him with the world of being a sommelier. After reading a book on the Brunello di Montalcino vineyards, Imre found himself inspired by the dedication of producers, the history of the wine and the legacy of the terroir.

As a Manager at Latitudes in Key West, Imre oversaw the beverage inventory. Imre’s pursuit of a career as a sommelier took off in 2010 with an introductory exam for the Court of Master Sommeliers in New Orleans. After passing the second exam, Imre joined the Café Boulud team in 2011. The six years of experience with Café Boulud’s refined menu and expansive wine list has had an enormous impact on shaping his expertise and philosophy as a sommelier, also enabling him to pass the Advanced level In 2017. 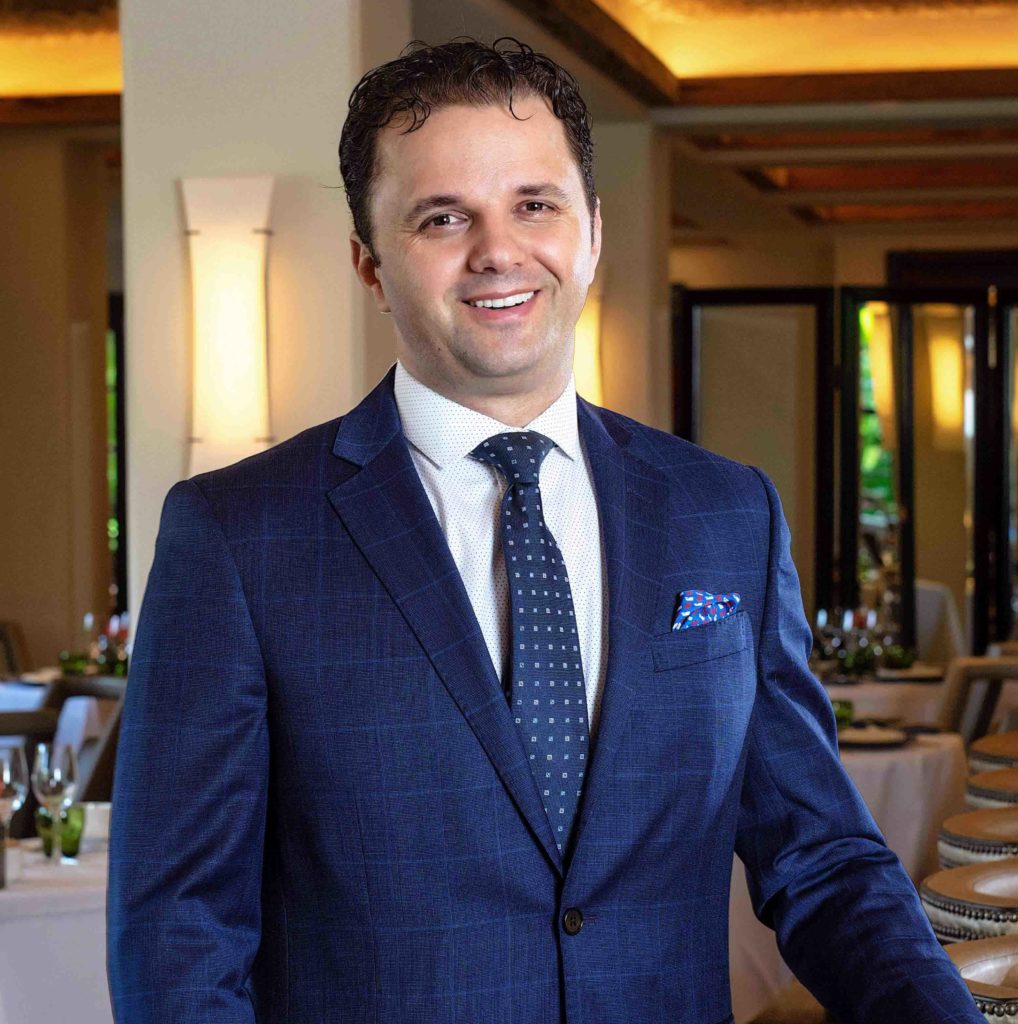 Lucian Vasile Puscasu was born and raised in Brasov, a historic city known for its medieval walls and cobblestone streets in the Transylvania region of Romania. Ringed by the Carpathian Mountains, traditional charm and modern city life made Brasov a popular summer tourist destination full of lively local cafés which inspired Lucian to pursue hospitality professionally.

In college, Lucian took his first job in the industry as a bar-back, broadening his experience over twenty years with various roles at prestigious restaurants, from bartender, to server and eventually bar and restaurant manager. His diverse background gave him a deep understanding of restaurant operations, which ultimately led him to America in search of his next pursuit.

In 2009, Lucian joined Chef Daniel Boulud’s restaurant group as part of the Palm Beach team. By holding positions as both server and bartender, Lucian honed his skills over the next six years to become the Assistant General Manager in 2015. Lucian’s dedication to Café Boulud Palm Beach was well appointed in August 2017, when he assumed the role of General Manager to oversee the day-to-day operations of the restaurant.

Lucian takes great pride in ensuring the quality of guest’s experiences, and implementing the highest standards of service as directed by Chef Daniel Boulud. He is proud to be surrounded by a team of talented and dedicated people with the same drive and passion for the industry as himself, and one of his greatest joys is witnessing a continuous transformation of the menu, dishes, and ingredients throughout the year. 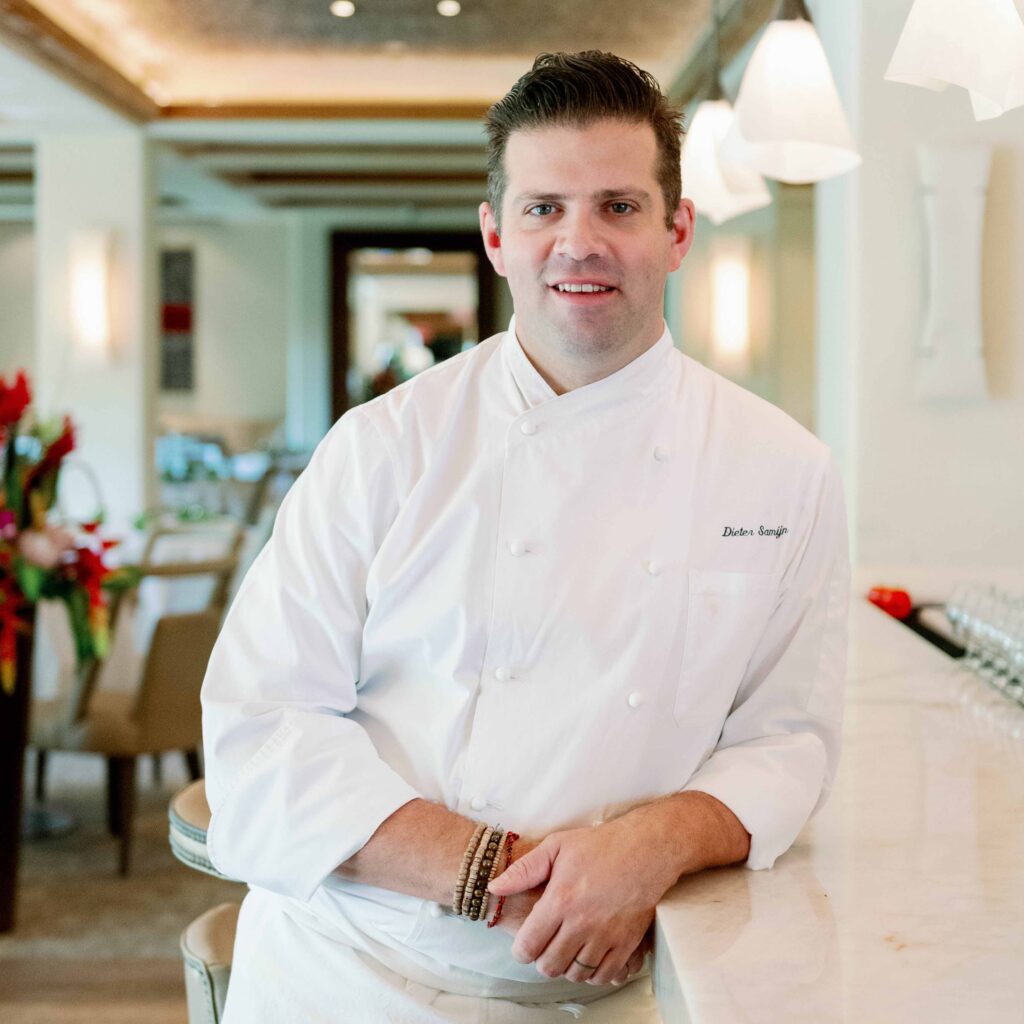 Dieter Samijn never knew he wanted to be a Chef growing up. Born and raised in Antwerp, Belgium, he began his career as an Electrician after graduating from The Technical School of Duffel in Belgium. He quickly realized this was not his destined path and decided to follow in his younger sister’s footsteps to Culinary school, Hotelschool Ter Duinen in Koksijde in Belgium, where he learned to become a diverse chef.

Dieter’s life took a professional turn when he entered the world of catering, working as the Executive Chef and General Manager for Delicious Catering in Oostkamp, Belgium. After catering high-end events for four years, Dieter decided he wanted to return to restaurants and move to the United States.

He served as the Executive Chef and General Manager at B Too in Washington D.C., a Belgian Inspired restaurant By Bart Vandaele, for four years. Dieter oversaw sales, menu design, staff training, payroll, special events, outside catering, and more. Bart taught Dieter all the facets to running a kitchen and restaurant in the United States, and for that, Dieter is extremely grateful.

In March 2018, Dieter went on to join the kitchen as the Executive Chef at Daniel Boulud’s Upper West Side French bistro, Bar Boulud, before most recently making the leap from New York City to South Florida where in January 2021, he accepted the position as Executive Chef at Café Boulud Palm Beach at the Brazilian Court.